This week we are putting the ID spotlight on our new SharePoint Administrator Nik! 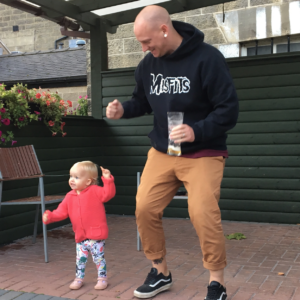 Tell us a little bit about yourself!

I’m Nik, I’m 33 (I think…stopped keeping track after 30). I’m originally from a small town in Derbyshire called Matlock but now reside on the outskirts of Matlock in an even smaller town called Darley Dale with my wife and baby girl.

I live quite an active social life and always have, whether it be playing football, training/teaching martial arts, going to the pub or just spending the time with family. I don’t remember the last time I had two days in a row of just doing nothing.

Give us some fun facts about you!

When I started playing football as a youth, I was top goal scorer for 3 or 4 seasons running getting on average 40 goals a season. Now I’m older I couldn’t hit a barn door with a banjo.

I’ve been on stage with the Icelandic Eurovision song winners Lordi at Download Festival.

Give us three emojis to describe your team!

I’ve gone for the chap that looks intelligent as I thought I knew a good amount about SharePoint before I started here. Then I met the team and realised how vast the knowledge base was at Intelligent Decisioning.

The guy having a good chuckle as having only been here a week and I’ve managed to have a good laugh with the team.

And finally, the horns. After a team lunch I found that several of them, like me can be found in the sweaty crowds of some of the UK Rock and Metal festivals.

What have you enjoyed so far about being at Intelligent Decisioning?

To be honest…everything. It’s a great team to work with, the customers I’ve dealt with have all been pleasant and they got me a bacon sandwich on Friday (what’s not to love).

Have your perceptions about Intelligent Decisioning changed from what you knew about Id before?

Not really. The only things I knew about ID before I started where what I saw on their Website and what I learnt from the Interview.

The website described a good team and a good product…Tick

Do you have any words of advice for aspiring people applying for Intelligent Decisioning?

Get involved. Whether you’re at the top of your fields or looking to get started, it’s very accepting here and with such a wealth of knowledge you won’t go far wrong.